I guess this would qualify as the beginning of my Pecan series.  I had the original 30 X 30 bits on my wall for what seemed like forever.  Just couldn't make up my mind about how I wanted to proceed with the background.

Then I saw the opportunity to do a piece to enter in a competition that would end up as a street banner.  I played around with several ideas but none really excited me. The issue was largely the very vertical aspect of the required piece. The original  had to be w12" X h22".  Then if accepted, it would be blown up to twice that size for the banner. I had decided just to let this competition pass. Then like a flash of lightening it came to me...The Sapling!!  The Sapling is the name of the first piece in the Pecan series.  But to do it for the banner would afford me a smaller size to experiment with the background.  AND it is very vertical!!  It all came together so well that it was completed in one day!!

What I learned making this beginning piece has further inspired me to get onto the first of the series -- the REAL Sapling! 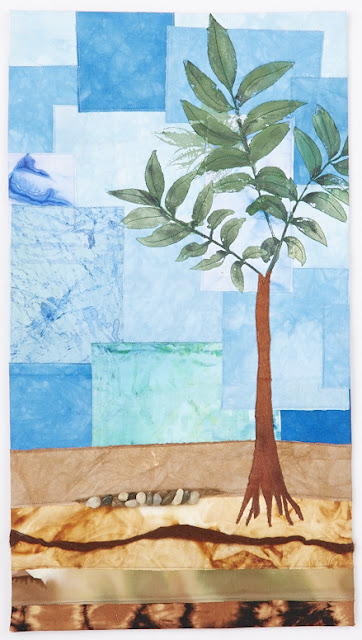 A photo of Main Street with the current banners AND....it doesn't end there. During the summer, the original pieces will be displayed in Main Street businesses.  In the fall, they will be auctioned off to raise money for the Zumbrota Area Arts Council.

AND...one more thing....Wil has a piece accepted for a banner as well!! Wonder if we will be hanging on the same side of the street!  LOL!!